We'll get in touch to schedule a time that works best for you.

A Quick Review of Google May Core Update 2022

A Quick Review of Google May Core Update 2022

As many of you are aware, Google released a core update at the end of May on the 25th. This update has been affectionately dubbed the “May Core Update” by the SEO community. 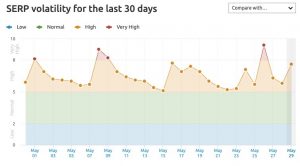 On May 25th, 2022 Google officially announced the release of the “Broad Core Update“. The last time it was released was in November 2021, it caused a significant fluctuation and damage to digital marketers since it was the peak time of online shopping. However, this time around, it was much safer timing as everybody is getting time for their websites to get back on track (if they are hit by it). 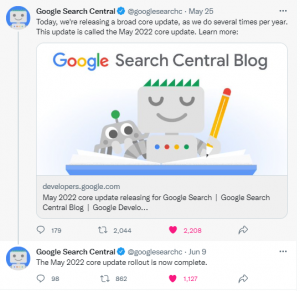 What is a Broad Core update?

Broad core updates are algorithm changes that Google makes to its ranking system. These updates aren’t announced in advance, but they’re usually rolled out slowly over a period of days or weeks.

However, nobody knows what these updates are specifically targeting, no wonder they are called “Broad”. All we can do is make assumptions and take educated guesses.

Previously, there were different updates like “Panda” or “Penguin“. They were specifically designed to target the quality of content and backlinks. But when a Broad core update is released? Well then, there are some winners and some losers in it.

The volatility of May Core Update 2022

It’s been a little over a month since Google rolled out its May core update, and we’re still feeling the effects. If you look at the peak levels of high-rank volatility in the picture below. You’ll notice it is quite similar to November 2021 Core update. 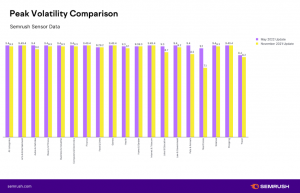 However, that’s not the case when we look at the impact of them both even though the peak levels of high rank volatility are above 9 in both the updates.

Rank Volatility Change Comparison of May and November

Rank Volatility is pretty common after every broad core update and the May core update was no different. It saw extreme fluctuations in rankings.

Here is the comparison graph for the different verticals that saw short-term average gains and losses in both the updates. 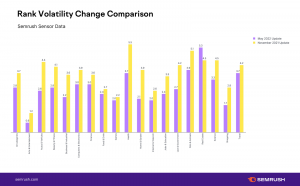 Verticals with Greatest Increase in Rank Volatility on Desktop

When we talk about average gains on desktop, Real Estate tops the list of verticals with the greatest increase in rank volatility. Here are the 5 top gainers on desktop:

Verticals with Greatest Increase in Rank Volatility on Mobile

Even on mobile, the verticals were almost similar but with different averages. However, Health replaced Travel on Mobile rank volatility. Here’s the list of the top 5 impacted verticals on mobile:

As the Health industry saw a significant increase in rank volatility, websites are now ranking higher than Government websites. Even though there are non-English health websites that saw a drastic decrease in organic traffic. However, it is still not fully assured if non-English medical publications were hit by the May core update. 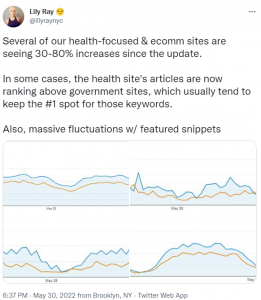 Average Gains and Losses in Rankings

Here’s a quick overview of the average gains and losses of rankings in different industries. Almost all the verticals were affected, some significantly higher while others were comparatively less. Except for Real Estate which saw an average gain in rank volatility. 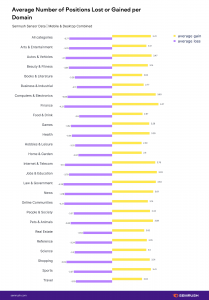 Takeaways from Google’s May Core Update

While the full extent of the update is not yet known, we wanted to provide a quick overview of what we do know.

First and foremost, it appears that this update was designed to target low-quality content. In particular, Google appears to be cracking down on content that is thin, poorly written, or lacks originality. This is good news for those of us who value quality content.

On the other hand, it is equally important to focus on E-A-T. Of course, we are not talking about food right now (haha!). E-A-T stands for Expertise, Authority, and Trust. It is a way of demonstrating if you are an expert in the field, you’re providing content that eventually makes you a trustworthy source? Well, if yes, you’re good to go.

It’s worth noting that this is just the latest in a series of core updates that Google has released over the past year. While each update has its own unique characteristics, they all share one common goal: to improve the quality of search results for users. So far, it appears that this latest update is succeeding in that goal.